To Matheran (part II) : The broom seller and the cold drink stall 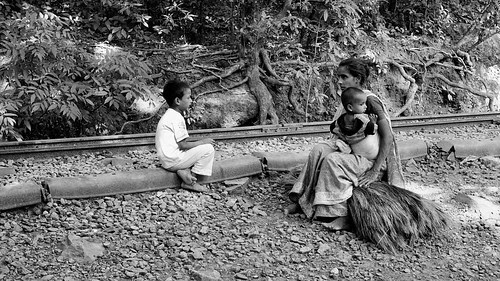 This woman was carrying that huge load of brooms on her head and a child in a sling. Her older kid walked alongside. They both were bare feet. The train track is treacherous on the feet - even with shoes on - with all the stones. She stopped by the cold drink stall for a rest. I guess buying a cold drink was out of question, but the company of people was better than sitting alone. Such is Irony. Such is life.

We have had limbu or kokum sherbat at this stall for a few years now. He had started with just a table in a clearing next to the tracks. Slowly the place has transformed into a nice clean joint where people rest. The journey from Dasturi to the market takes about 45 minutes of pleasant walking. One can follow the road or one can hop onto the tracks and follow them from Aman Lodge station. Just before the stall, the track passes near the edge of the valley and you have a fantastic view of Garbett point.

After the 26th July 2005 rains much of this side was washed away and the tracks had hung in empty air. I had crossed them in the night in the following November without knowing about the landslides. It had been scary to see them in the daylight when we were returning. Now the tracks have been restored and also the train service. But all along the tracks at regular intervals they have put up advertising poles which are very ugly and are an eyesore. But I guess it was an attempt to collect money for the tracks as well as for the village. 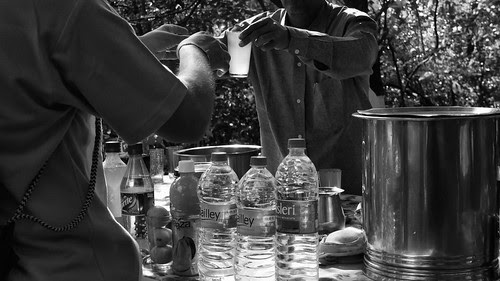 The cold drink stall at "Stop and Rest Point"
Posted by quasibaba at 23:15

the first pic is so very touchy ,,, even the description...

I guess with time the soles of their feet would have become hardened enough to walk on such tracks with ease, and their naked feet would be giving them surer footing than our stupid shoes.

But she would probably love to be able to afford a refreshing drink, at least for her kids... Simple folk; difficult life.

The hoardings are a bloody eyesore for sure! It is sad that these beautiful places have to be sold as advertising space in order to repair even the basic infra. What are our taxes for then....?

@Vivek Rao : Our taxes are to make a few people very rich. :)