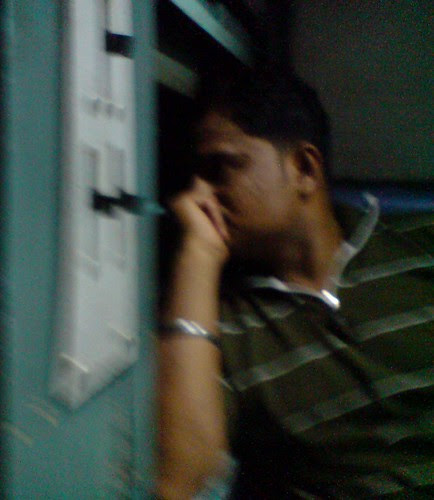 in the moving train in the night


It so happened that a friend convinced me to go to Ranthambhore National Park with their gang. It was foolhardy to invite a seasoned fool. They take these people out for excursions commercially. I have always dreamed of going to a National Park more elegantly, but hey that's fools for you.

They booked me second class (my request) on the Jaipur express while the rest had gone ahead by AC. I was on a combined ticket with some other people I had no clue about. And I did not have the ticket. All I had got was the number of the booking agent...

After several tries he managed to pick up his phone and assured me that the ticket was in the safe hands of a Mr. Chotani, who was a regular traveler and would board at Borivalli. I got Mr. Chotani's number but he refused to pick up.

So there I was, on the day, on the platform waiting for the train at Borivalli. Like a fool with no ticket. A careful examination of the xerox of the ticket, which I did have BTW, revealed that Chotani could be traveling with a young male and a middle aged female. Son and wife, most likely, I decided. The train was late and so as the crowds built up I studied them to see if I could spot my ticket holder. Lots of families with kids. But my eyes kept going back to a short feller who was as round as he was tall. He was wearing a sleeveless baniyan, showing chest hair, shorts which came up to his knees and some fancy sandals. He has luggage like he was running away and a wife and a kid.

Well the train came, I rushed into the compartment. Disappointingly he got into another. That got me praying that whoever was holding the ticket should come soon, before the TT. I found my seat and waited for anxiously. Minutes passed and, to while the time, I got acquainted with my 2 other neighbors. Young types from Poona on the way to Jaipur. I was almost ready to jump off as this was the first time without ticket and I am not used to the situation. *grin*

Then the train left with still no sigh of ticket man. I was busy imagining 100's of escape scenarios where I jump off the train. Then the TT came and asked for the ticket. I told him that my 'friends' got into some other compartment and were on the way. He gave me a look, suggested I go look for them and went on. Shortly he came back again. I told him that I have a xerox and will it suffice. He said no and started looking at me very suspiciously.

Just at that moment ticket man (Chotani from the ticket) comes in with wife and son and luggage and tells the TT grandly that I am with him. He is the same guy from the platform. Armani (now that I was nearer) baniyan and all.

He came in with some luggage having left part of it somewhere else. He went and got it. Apparently he knew every employee of the train from the TT's to the motorman to the kids who sold news papers and cold drinks. He talked non stop, a smart talk which dispensed sundry wisdom all around. His wife paid noble attention. He would ask her for a bottle of water. Then hand her the bottle cap and instructed her to hold it. Drink the water and then gave her the bottle back and instructed her to put the cap on. He would make a wise crack and look around with a smug smile of the knowledge that he was wise. He was just curious, I guess, if we 'got' it. But funny as he was, he seemed a nice guy. He was not arrogant with the hawkers. He was friendly with his co-passengers. He was soft spoken, though instructive, with his wife. He was very patient, though strict, with his son. He spent a lot of time playing with him. They had got packets and packets of 'farsan' and food etc. which they shared open heartedly with all around in typical Indian traveler fashion. After dinner he gave me a knowing smile and got out a small bottle of 'Number One' from his laptop bag. He offered all his male fellow travelers the drink declaring that we could procure more in the train if required.

He was a nice family man who kept on repeating that life and the journey were to anjoy.

Next afternoon we all got down at Sawai Madhopur station while the train continued to Jaipur. My first time in Rajasthan.