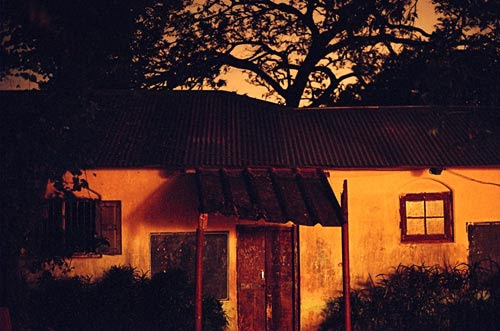 I reached at 2100hrs, after braving the darkened bylanes of Matheran, at the Sarasvati Vidya Mandir school. The old gate, the heavily wooded grounds, the climbing pathway, they all made me feel like I was entering some mysterious old castle rather than a school. In the diminutive light of my torch I climbed up as fast as my quirky knee would allow. As I reached the top, the sight of light put some heart in me. There was a single naked light bulb lighting the school varandha.

I called up. No answer. There was no one there. Like a moth, I squatted underneath that light. Outside was pitch darkness and weird noises. The funny part was there was no cell network under the light, but as soon as I walked into the darkened far corner and into the weird noisy night, the cell showed a bar. I sms'd a few who I assumed to be near. One never really knows. I waited for half an hour twiddling my thumbs and getting more and more restive ... then I unpacked the camera and the tripod and clicked a few. The one above is one of the school buildings. I could barely see it to focus.
Posted by quasibaba at 11:29

Hey am back in bbay ... gimme a buzz sometime... looking forward to being photographed this time atleast :-) you know my yahoo.

hey! nice to hear from you. how are things in banglore ? I lost my phone and also your number & I dont remember your yahoo id spelling. :P Please forgive me O Lady Mocha.


lady chockeletta, sitting on the chat
talking to the phony feral cat
waiting for the bangalore guy
who stays in the hostel and is awfully shy
she says it is beautiful love at last
and has left all of rediff chat aghast!
there were some who committed suicide
and some went to bangalore for a homicide
now she says she wants to shoot
photos you ass, not some silly old coot.
armed to the teeth she prowls the streets
looking for that fantastic photo sheet
I look on, I am only inane
wish I was a little more sane
why do I write these silly rhymes
in spite of being kicked in the butt many times?

gimme you number again .. my yahoo id is quasiabhi at ya...com

i am repenting, why i wasnt there?